Out in the South Fund Grantee Convening and New RFP Process 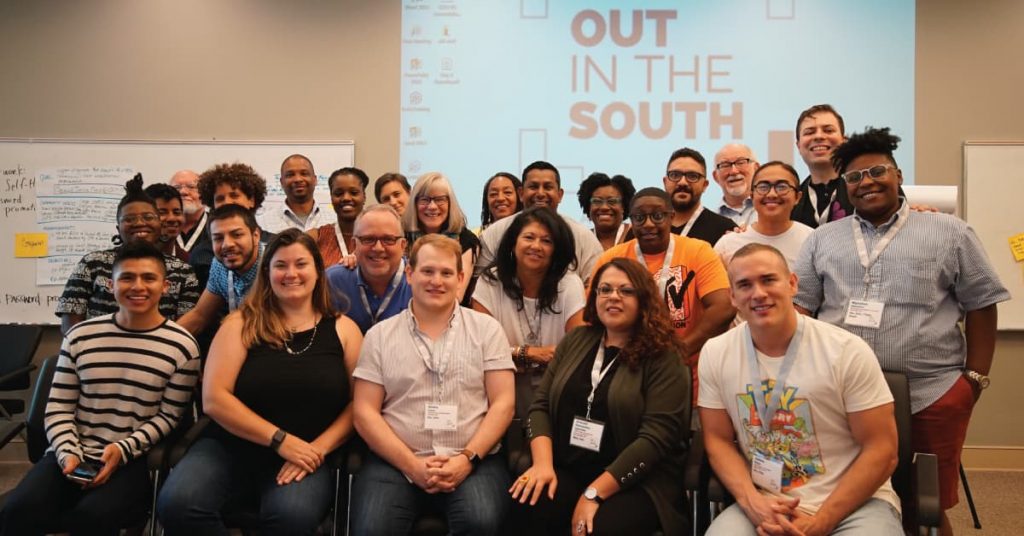 Out in the South Fund Grantee Convening and New RFP Process

By: Chantelle Fisher-Borne on September 5, 2019

The Out in the South Fund continues its work of supporting and building sustainable LGBTQ funds led by and for LGBTQ Southerners and shaped by a commitment to racial and gender justice. This strategy is a response to the decades of underfunding of Southern LGBTQ communities and is designed to build long-term resources for a healthy movement ecosystem of LGBTQ organizations rooted in the South. The Fund recently held its third grantee convening and is currently in the process of awarding its fourth round of grants. Earlier this summer, Out in the South Fund grantees gathered in Durham for our third annual grantee convening. Our hosts included the Campaign for Southern Equality and Southern Vision Alliance, two North Carolina-based grantees who host funds that support LGBTQ grassroots organizing throughout the region. As with all of our grantee convenings, our gathering in Durham was a time for staff and volunteers from our grantee funds to learn from each other’s efforts and integrate the most effective strategies for grantmaking to bring resources to LGBTQ communities throughout the South. Topics included integrating a racial justice lens in grantmaking, creative fundraising strategies, and community engagement.

Building on what we’ve learned in the past three years of grantmaking, Funders for LGBTQ Issues is now in the process of seeking proposals for the fourth round of Out in the South grants. During the past three years, the Out in the South Fund has awarded over 1.5 million dollars in grant awards to build new and support existing funding structures that support LGBTQ communities in the South. In an effort to maximize the impact of our grantmaking, our next round of awards will be awarded through an invitation-only process with a focus on current or past grantees. This shift from an open call for proposals is a reflection of our interest in deepening our work with our current grantee cohort so as to position this core group of Southern LGBTQ funds for long-term sustainability and success. We may also invite proposals from a small number of new potential applicant funds serving Southern communities not being fully reached by our current cohort of grantees. We also hope this more focused invitation-only process will minimize the burden on both current applicants and new applicants less likely to receive funding given that the initiative is now in its fourth year of grantmaking. If you have any questions, or would like to inquire about receiving an invitation to apply, please reach out to Out in the South Director Chantelle Fisher-Borne at [email protected] or (919) 260-2189.

Through our grantee partnerships, we are learning what it takes to build truly sustainable funding structures for LGBTQ communities in the South. Our grantees represent a wide array of structures and strategies, including LGBTQ funds housed at community foundations, independent LGBTQ public foundations, regional intermediaries re-granting funds to grassroots organizations, and funder collaboratives. Over the past several years, our grantees have conducted community needs assessments and listening campaigns to better understand the conditions shaping the lives of LGBTQ people and their families, with particular attention to LGBTQ people of color and trans communities. These assessments have helped shaped funding priorities not only for our grantees but also for the larger network of funders investing in local Southern communities. Our grantees have also worked to build their internal capacity related to fundraising with a focus on both local donor development and partnerships with local foundations. In addition, our grantees have worked to build grantmaking structures that reflect the racial, generational, ethnic, and gender diversity of our communities. Our grantees are helping us understand what it means for LGBTQ Southerners to move money to the issues impacting their communities at a local level.