The 2018 Diversity Among Philanthropic Professionals Report: A Tale of Two Sectors In 2018, Funders for LGBTQ Issues set out to survey the board and staff of foundations in order to identify how many LGBTQ people worked in philanthropy — which resulted in The Philanthropic Closet: LGBTQ People in Philanthropy.

In the designing the survey, we realized that we had an opportunity to not only ask about sexual orientation and gender identity but also to inquire about a range of personal identifiers. With the inaugural Diversity Among Philanthropic Professionals (DAPP) Survey, we asked participants to identify their role within their foundation, their age, gender identity, sexual orientation, race and ethnicity, and disability status. This report lays out the results of the DAPP survey in aggregate form.

Produced in partnership with CHANGE Philanthropy and Emerging Practitioners in Philanthropy (EPIP), the report and accompanying infographic explore diversity in the philanthropic workforce. Overall, the report finds a statistically significant difference between funders with a social justice focus and all other funders. Social justice funders were much more likely to have higher representation of LGBTQ people, people of color, and people with disabilities.

Special thanks to the Evelyn and Walter Haas, Jr. Fund for providing the funding to undertake the inaugural DAPP Survey and to SMU DataArts for helping us administer the survey. 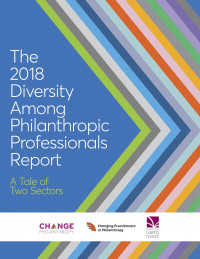