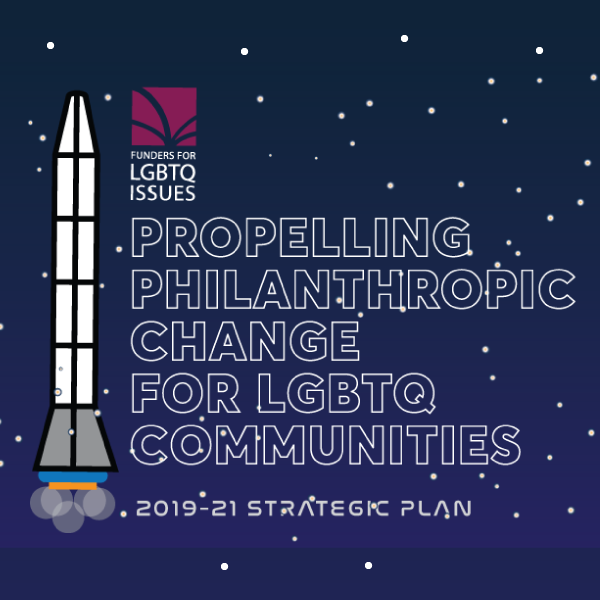 It’s my pleasure to share with you Funders for LGBTQ Issues’ new strategic plan.

In 2018 we closed out our last strategic plan and developed a new one to guide us through the next three years. Many thanks to all of you who helped us by sharing insights with our consultants, Converge Consulting, or by speaking with staff and board more informally about our direction.

In assessing the last plan, we recognized that the past several years have been a period of rapid organizational growth. Our staff has grown from four to ten, our revenue has more than tripled, and our membership has more than doubled. The last plan set an ambitious North Star of increasing foundation funding for LGBTQ issues to $200 million – and we are now close to achieving it. In several areas, our progress has exceeded goals that years ago we thought might too ambitious: Southern LGBTQ funding has quadrupled to more than $17 million, and U.S. funding for trans communities has surpassed $16 million.

Given these successes, much of our new strategic plan seeks to continue and build upon the many aspects of our work that are working. At the same time, we identified definite areas for improvement and expansion.

During our collaborative planning process, it became clear that the essence of our work is the transformation of the culture of philanthropy to be more inclusive of LGBTQ communities both in internal practices and in grantmaking. We realized that deep transformation is only possible if we advance change at all levels of philanthropy: the sector-wide level, the institutional level, and the individual level. We recognize that lasting change in philanthropy requires deep engagement and interventions at all three of these levels–and always with a strong racial, gender, and economic justice lens.

As such, our new strategic plan centers on three core strategies:

Transform the philanthropic sector to better understand, support, and improve the lives of diverse LGBTQ communities and movements.

Empower LGBTQ leadership in philanthropy by cultivating a village of LGBTQ-identifying people and their allies as champions of LGBTQ inclusion, and racial, gender, and economic justice.

We have also set an internal strategy to position the organization to achieve the above goals:

4. Aspire to the highest standards of a philanthropic network

Aspire to the highest standards of a philanthropic network by effectively communicating our work, building a sustainable and healthy organization, and living our values of LGBTQ, racial, economic, and gender justice.

The above strategies will allow us to hone and strengthen our ongoing work. Specifically, there are several things you can expect to continue:

We’ll also grow and experiment with several new or expanded lines of work:

Lastly, we’ve realized our recent rapid organizational growth has outpaced our existing organizational structure. In reviewing other philanthropy-serving organizations of similar size, we found that we were the only one without any vice presidents or chief officers beyond the president. With a staff of 10 and an operating budget of nearly $2 million, we need systems and structure commensurate with our increased size–beginning with the addition of an executive team to an organization that previously had six directors, most of them reporting directly to me. I’m pleased to announce the promotion of three members of our team: Kristina, Lyle, and Marvin have been with Funders for LGBTQ Issues for five to eight years each, and have consistently demonstrated exceptional leadership, dedication, and skill. Their promotions continue our practice of cultivating internal talent, and also recognize that all three of their jobs have expanded significantly with the expansion of the organization. Moreover, we believe this clearer organizational structure will position us for achieving the ambitious goals set forth in our strategic plan.

We’ll also devote more human resources to our training program, the area of greatest growth in the next three years. This work will be led ably by Rebecca Wisotsky, our National Director of Philanthropic Outreach, who will also have new staff support and consultants to support her as we scale up the training program.

Many thanks again to our board, staff, members, and partners who participated in the planning process, and especially to the team at Converge Consulting for their skillful facilitation: Takema Robinson, Hamilton Simon-Jones, Rhea Lewis, and Suzanne Raether.

These are challenging times to work for social justice philanthropy. Like all of us, there are moments when cynicism overwhelms me, when it seems we take two steps back for every step forward. But then I look to you: my colleagues, my friends, my chosen family in philanthropy and beyond. I see all that you and we are doing, and my optimism is re-charged. Together we can propel our communities to the stars.